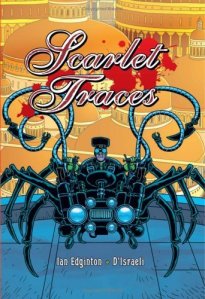 Read and greatly enjoyed this short book by Ian Edginton and D'Israeli yesterday.

It's a ripping yarn set ten years after the martian invasion of Earth as described by H.G. Wells.

Visually-inventive and richly-coloured, it leaves you on a dark and foreboding cliff-hanger setup that left me searching for the next in the series (I guess the first was by Mr. Wells)

The widescreen nature of some of the art is intriguingly infomed by the fact it was orignally destined to be seen on the web as a flash/shockwave animated web-comic.

This from the popimage review:

"It's one-time status as a web-comic has impacted the art in the final book in many ways, some as subtle as the colour palette and some as important as the design ethic. The world's devices and machinery were given a more detailed structural underpinning because there were going to be sections of 3D animation featuring the alien vehicles on the web. These principles were applied to all of the cranes, fire engines and other devices that appear in the book, and the result is an enjoyable and plausible world. The design and spirit imbued in the Martian and Martian-derived technologies is delightful and inventive, but also classically literate as well."

As a result of the abortive start to their creation it took the duo behind this ten years to get it into print – hopefully the next installment won't take as long to see the light of day.