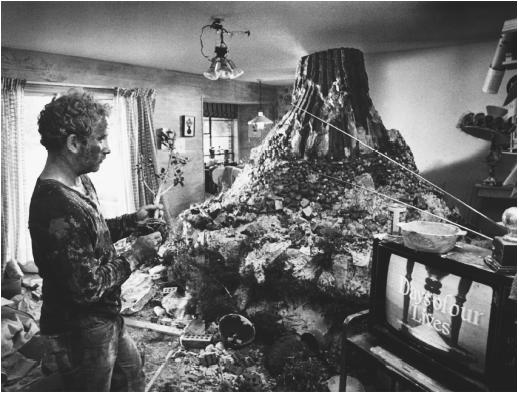 Charles Holland at Fantastic Journal with a brilliant assessment of CE3K and, for that matter – design and material exploration:

“The film is obsessed with issues of representation and non-verbal communication. The famous five-note score that the scientists use to communicate with the aliens, for example, effectively replaces speech. The chief scientist is a Frenchman (played by film director François Truffaut) who makes no more than one or two gnomic utterances and is accompanied throughout the film by an ineffectual translator. The fact that none of the Americans can understand him seems to imbue him with some special understanding of what is going on.

Roy can’t communicate his obsession through conventional language and is forced into non-verbal communication. He has to make what he is thinking in order to express it. And he’s not alone in his obsession. Another character – Gillian Guiler – is also obsessed with Devil’s Tower. She draws it over and over again. In a brilliant scene the two of them converge on Devil’s Tower aware that it’s the location for the alien spaceship’s landing. Trying to work out how to scale the mountain Roy reveals that his knowledge of its topography is vastly superior to Gillian’s. “You should try sculpture next time”, he deadpans.”

3 thoughts on ““He has to make what he is thinking in order to express it.””